Time for a Reboot... 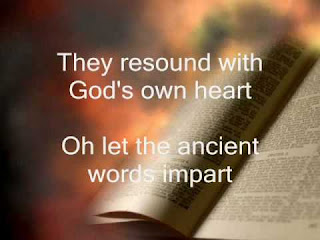 What is a “reboot?”  The dictionary definition is “to make a change in (something) in order to establish a new beginning.” Back in the fall of 2015, I was impressed on my heart with this idea for an online radio service featuring the ancient and classic hymnology of the church. To my knowledge there are not many sources for this type of music and message on radio or the Internet.  That was the very beginnings of “Ancient Word Radio.”

In those first weeks I established a website for the project and started investigating various online streaming hosts and providers.  I used my broadcast background to sift through all the computer automation options to run such an endeavor.   By April of 2016 I started collecting the music that would be needed to give a variety of song and hymn offerings. Then something happened.  It’s called “day to day” life. My work in both Ministry and Broadcasting took a major change, and the Ancient Word Radio project ended up on the back burner, almost forgotten.

In the spring of 2018 I woke up one day and realized I had this “incomplete” project that needed my time and attention.  Maybe, in this changing time, such a voice of truth is needed.

Over the past several months I have reapplied myself to this project. Right now there are thousands of song titles that are being processed, and a location to house the project has been found. Ancient Word Radio is in the process of a “reboot.”

This project is now taken on a life of its own, and all the pieces to the puzzle are falling into place. As we enter the summer of 2018, Ancient Word Radio will be a reality. An APP for Android phones is about ready, and one for iPhones™ is in development.  Along with music a very select number of programs are being considered to make the project complete.

It is my hope that Ancient Word Radio will provide comfort, solace and encouragement to people in many parts of the world by sharing the unchanging truth of God’s Word, and the redemption found in Jesus Christ.

Posted by Ancient Word Radio at 12:36 PM No comments: